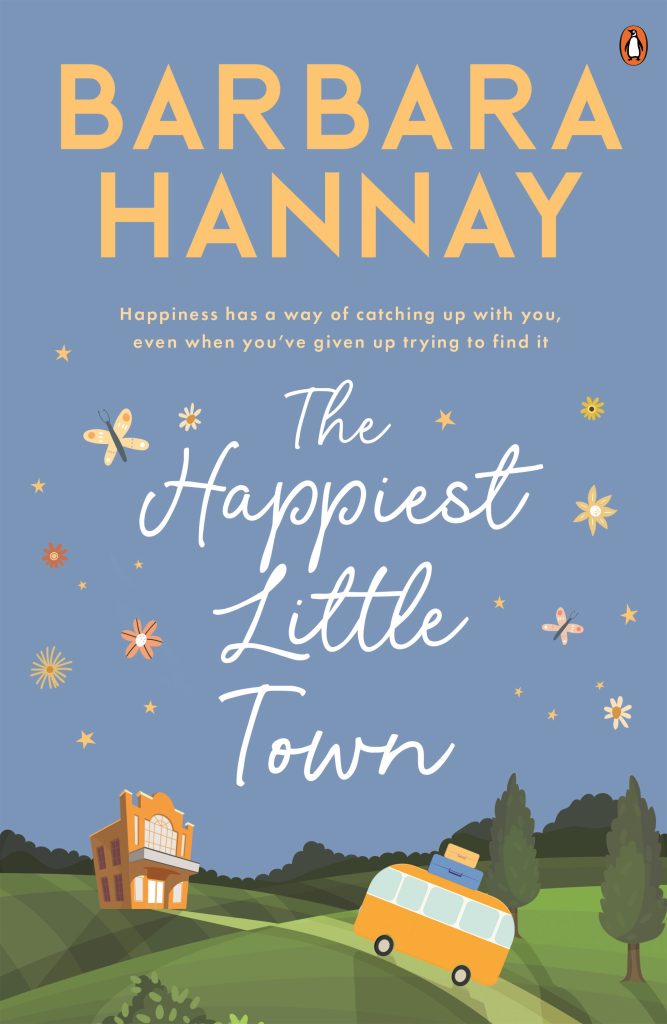 Happiness has a way of catching up with you, even when you’ve given up trying to find it.

Tilly doesn’t believe she can ever be happy again.

Thirteen-year-old Tilly’s world is torn apart when her single mother dies suddenly and she is sent a million miles from everything she has ever known to a small country town and a guardian who’s a total stranger.

Kate is sure she will be happy just as soon as she achieves her dream.

In the picturesque mountains of Far North Queensland, Kate is trying to move on from a failed marriage by renovating a van and making plans for an exciting travel escape. The fresh start she so desperately craves is within reach when an unexpected responsibility lands on her doorstep.

Olivia thinks she’s found ‘happy enough’ until an accident changes everything.
Ageing former celebrity actress, Olivia is used to winning all the best roles in her local theatre group, but when she’s injured while making a grand stage exit, she is relegated to the wings. Now she’s determined that she won’t bow out quietly and be left alone with the demons of her past.
When these lost souls come together under the roof of the Burralea Amateur Theatre group, the countdown to opening night has already begun. Engaging with a diverse cast of colourful characters, the three generations of women find unlikely friendship – and more than one welcome surprise.

From the bestselling author of The Garden of Hopes and Dreams comes a heartwarming and uplifting story about the joys of new beginnings.

It wasn’t the happiest of beginnings. Tilly tried to pretend it would be okay, that somehow, miraculously, everything would turn out for the best, but the rain soon dampened her foolish hopes. The rain, the winding road that climbed into the mountains, twisting and curling like a snake, and the giant trees hanging over the bitumen, their leaves dripping, blocking out the sunlight. The gloom of it made her more wretched than ever. Wretched and disgustingly car sick.

She knew her mum wouldn’t have wanted this. Her mother would never have dreamed of sending her precious only child away from sunny Cairns, away from her circle of friends and her school where at least a couple of the teachers were cool. And her mum certainly wouldn’t have sent her to the boring old Tablelands where there was nothing but farmland and hardly any shops, and certainly nowhere for kids to hang out.

Everyone knew the cafés up there only served tea and scones and were full of boring, wrinkly old folk. And it was always raining. She might as well be heading for Mars. Actually, Mars would probably be more way more interesting than a pathetic little nowhere town like Burralea.

Tears burned her eyes and threatened to spill, but she’d been crying for weeks now and she didn’t want Jed to see her crying again, although he deserved to feel bad. He deserved to feel guilty as hell, seeing as he planned to dump her with some unknown woman and just abandon her.

For the first time in months, possibly years, Kate Sheridan was happy. Happy with a kind of over-the-top joyousness that had her bounding out of bed every morning and looking forward to each new day.

Admittedly, her bubbling emotions were probably eighty percent excitement and twenty percent nervousness, but it was wonderful to feel alive and hopeful again. And it was all thanks to the van.

Amazing really, that a divorcée in her early fifties should feel so over-the-top thrilled about a second-hand, almost six years old, former tradie van. But Kate had such wonderful plans for renovating her van’s interior, as evidenced by the layout designs crammed into her notebook, and the oodles of pictures saved to her Pinterest page.

Countless hours she’d spent in research, watching YouTube videos of the most gorgeous renos, reading books and blogs and listening to podcasts about the process. She’d had doubts, of course, huge doubts about her handywoman skills, but she’d been encouraged by the discovery that plenty of other women had managed this crazy endeavour solo.

The messages about getting started were nearly always the same. Don’t be overwhelmed. Just take it slowly, step by step.

Already, Kate had taken the first of these steps, bravely stripping the van’s insides and having a side panel replaced with one that would allow her to sleep across the van rather than lengthways. And, having padded the walls with insulation, she’d begun the challenging task of lining them with tongue and groove timber.

This ambitious task was only half finished. Kate had needed to seal the timber first – two coats on either side – before hammering the panelling together with a rubber mallet, wood glue and patience.

The occasional bent board had proved a nightmare, but she’d learned to discard these, rather than agonise over getting them to fit, and she was already thrilled by the transformation. A timber interior gave her little van an enchanting air of timeless charm.

She also had a host of exciting plans for overhead cupboards, racks and shelves. She’d even found a little triangle of ancient stained glass in a second-hand shop that she planned to incorporate into her design.

Although her project was still in its infancy, Kate allowed herself to dream about hitting the road and heading off… somewhere… anywhere…

Possibly because she’d lived in the North Queensland for most of her life, she especially liked to picture herself in the wintry south, cosy in her beautiful, timber lined van and sipping a mug of luscious hot chocolate as she gazed out at a stunning vista of sea and southern skies. Oh, the freedom!

Of course, Kate still faced a huge mountain of work ahead of her. Right now, the little garden shed that came with her rented cottage was stacked to the rafters with pieces of timber in every length and thickness, as well as finds from second-hand shops. And that was without the carpenter’s tools, including jigsaw and a nail gun, both of which Kate actually knew how to use, thanks to a series of useful tutorials on YouTube.

Kate was determined to create the cutest outfit on four wheels. Then, she would set off on the adventure of a lifetime, the adventure she deserved.

Her spirits took a small dive, though, when she looked out her bedroom window to find her van shrouded in misty rain. Again. For the third morning in a row. If this weather kept up, which it probably would – this was autumn in the Atherton Tablelands, after all – she would have to erect some kind of tarpaulin to work under.

Not a problem, Kate told herself as she swung out of bed, shoved her feet into slippers and pulled on her dressing gown, knotting the sash firmly to emphasise her determination. She couldn’t be put off by a little drizzle. After all, the farmers in these mountains spent their entire lives stomping around in mud and rain, and at least it was cool up here, which was a welcome change after the steaming heat and humidity of Cairns.

Besides, she thought, as she spooned oatmeal into a saucepan, the rented cottage she’d found was a charming stopgap. Perched on a hillside a few kilometres out of Burralea, it offered gorgeous views of rolling green countryside. Bonus, it was cheap, and it wasn’t too far from the hardware store.

Anyway, Kate couldn’t have stayed in Cairns. It was just too horrible with everyone talking about her behind her back, and giving her pitying looks. She was sick of being poor Kate.

The entire city seemed to know the sordid details of her ex-husband’s fall from grace, including the fact that Stan had run away to Vietnam, where there was no extradition agreement with Australia, which meant he’d be almost impossible to extract. To add to the disgrace, Stan had taken off with his former business partner’s wife, plus far more than their fair share of the company’s profits.

This ghastly news had been front page headlines in the Cairns Post, and splashed all over the internet, as well as being gossiped about on the local TV and radio stations.

Throughout the shameful debacle, Kate’s friends had been amazingly supportive, which was very sweet of them. Bringing her comfort food and buckets of wine, they’d even abandoned their own families as they’d sat with her, telling her not to listen to all the gossip. But although Kate had divorced Stan a good two years before this latest scandal erupted – and had believed she was well shot of him – she’d still had to face the stares in the supermarket, the whispers and shocked glances.

She’d grown tired of hanging onto a tight, brave smile, while thanking people for their sympathy, when all she’d really wanted to do was to angrily agree that yes, her ex was a lying cheat and a womanising conman. And yes, it was just appalling that one of Cairns’ most popular tourist operators had not only lost his wife to this prick, but had been so financially stripped that he’d been forced to sell his charter boats, leaving his tourist business in tatters.

The emotional turmoil of being linked via gossip to her infamous ex had been far, far worse than the divorce. It didn’t help that Kate had felt a fool all over again for having once loved this man. She’d lost count of the hours she’d lain awake until 4am, battling regrets for the choices she’d made, primarily the major life choice of marrying a charming guy with sparkling green eyes and an off kilter moral compass.

She’d been quite certain she had to get away.