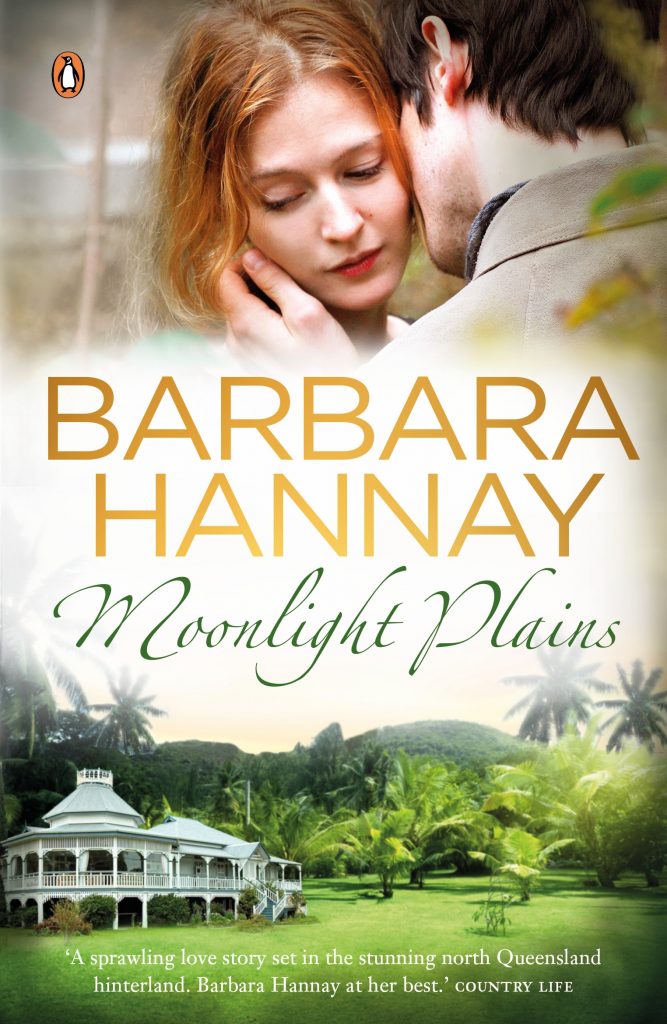 A breathtaking novel about finding love against all the odds that will keep you captivated from beginning to end.

In 1942, as war reaches Townsville, Kitty Martin is sent inland to the safety of Moonlight Plains. But when two American airmen crash on the isolated property, she is forced to grow up fast, coming face to face with tragedy, with love . . . and with heartbreak.

Years on and Sally Piper, a young journalist, is sent to Moonlight Plains to cover the story of a cattleman turned builder who is restoring his grandmother’s forgotten homestead. Sparks fly between them, but Sally is struggling to let go of the past, and Luke has his eyes fixed firmly on the future.

What they uncover together is a shocking secret that has been kept safe for more than seventy years. Now the entire family’s happiness is at stake – or does the truth about the past hold a valuable lesson for the future?

Sally’s friends were wrong. She shouldn’t have come to the ball. It was a mistake. But her friends had been so very persuasive.

‘You have to get back into the social scene, Sal. You can’t go on like this. There’s only so much running and swimming and kickboxing a girl can do.’

The messages had been coming at her on all fronts. She should be over her loss by now. Her grief for Josh was a moving and beautiful thing, but two and a half years was long enough.

Even the little old ladies at her grandmother’s nursing home had chimed in with their two cents’ worth.

‘You still have your whole life ahead of you, my dear. You’re not Queen Victoria, you know. You can’t grieve for your husband forever.’

The only people in Sally’s circle who had not showered her with advice were her parents. Admittedly, Sally’s mother had tried to steer her out of the black morass of her initial grief, but she’d been rebuffed by her only child one time too many. Angela Spence’s focus had quickly reverted to her mega-busy job as one of Townsville’s most in-demand lawyers.

And yet it was Angela who’d come up with the suggestion that Sally needed a dog. Of course, Angela hadn’t visualised an elderly female cattle dog, virtually on death row at the pound. She’d tried to urge her daughter towards a puppy.

‘This poor thing only has a few years left in her,’ she’d said as they stood in front of the old dog’s cage.

But there was something about the cattle dog’s wistful look that speared straight to Sally’s wounded heart. The poor old girl might be slow and arthritic, but she looked like a creature who needed a companion as much as Sally did.

The dog had arrived at the pound without a name, so Sally called her Jess, and after only a few nights together she and Jess were old friends, as if they both understood and shared the same sadness and loss.

Sally’s father had done his best, too. Tom Spence ran a secondhand furniture business, and while he wasn’t quite as busy and distracted as her mother, he was far too reserved to discuss deeply emotional issues with his daughter.

Instead, Tom had taken Sally skindiving on the reefs off Magnetic Island, where they’d swum around brain coral as big as a truck and she’d rediscovered the beauty of blue damsels and rainbow-coloured wrasse, silvery schools of herring and fascinating spotted maroon rays. Together they’d also canoed down the Burdekin, paddling between steep limestone cliffs and drifting lazily around shady bends, making their camp on the riverbank where, in the late afternoon, they listened as a wind rippled through the river gums, as if someone had rolled out an invisible rug, shaking dead leaves from the treetops.

To her huge surprise, Sally had found she enjoyed these activities now in her twenties almost as much as she had when she was a child. She’d understood that this was her father’s gentle way of showing her that it was possible to enjoy Life After Josh.

But while her parents had been gentle, Sally’s girlfriends had been persistently vocal. They’d coaxed her steadily and with such rowdy enthusiasm that eventually she’d started to feel the tiniest glimmer of hope.

At first it was scary to sense even the slightest change in herself. She’d become used to the awful emptiness that had dulled her for the past two and a half years, but now the lethargy shifted ever so slightly.

‘I don’t know what you expect of me,’ she’d warned her friends as they gathered for Friday drinks in their favourite Palmer Street wine bar. ‘I couldn’t possibly face the nightclub scene again. And I don’t want any of your matchmaking, thanks. Don’t bother inviting me to dinners and parties where you’ve already lined up some poor guy to be nice to me.’

Her best friend Megan had pouted at this. ‘You’re really making this hard, you know, Sal.’ Since kindergarten, Megan had always been a girl who needed quick-fix solutions to every problem.

In the end, it was Kitty Mathieson, an old lady at the nursing home, who’d told Sally about the ball. Sally and Jess were making their weekly visit to Sally’s nan, who had Alzheimer’s. While Angela Spence only had time for quick visits to the home, mainly fussing with admin over the level of care her mother was receiving, Sally had developed the habit of sitting with her grandmother.

Conversation was difficult, so she often read aloud to her.

‘Read the one with all the food,’ Nan nearly always said, and Sally knew exactly what she meant. She’d lost count of the number of times she’d read about Ratty and Mole and their picnic on the riverbank, but she read their favourite scene from The Wind in the Willows yet again. Whenever she looked up from the book, she felt a lump in her throat to see the almost childlike smile on her nan’s sweet familiar face as she listened and nodded and patted Jess.

As always, it was quite a lengthy process for Sally and Jess to make their way back through the home from Nan’s high-care ward. They had to stop for lots of visits with other residents who also loved to pat Jess’s soft coat or to slip her treats.

‘Here comes our dog,’ they would call, gleefully waving.

Sally always made a point of visiting Kitty Mathieson, who saved pieces of biscuit for Jess. While Kitty’s mobility was limited and she apparently had a heart condition, her brain was as sharp as a needle and she always had something interesting to discuss.

Today, her eyes held a special sparkle. ‘I have something for you, Sally.’ With a very shaky hand, she shifted a tea mug on the stand beside her bed and revealed a flyer underneath. ‘My daughter dropped this off.’

Sally had a nodding acquaintance with Kitty’s daughter, Virginia, a slim, lively woman, around sixty, with greying blonde hair and friendly blue eyes.

‘They’re having a dance with a wartime theme out at Charters Towers, and Virginia thought I might be interested.’ Kitty laughed. ‘Not to dance, of course, but I spent time near the Towers during the war.’ She pointed with an arthritic finger to a decorative string of American flags on the front of the pamphlet, partly obscured by a tea stain.

‘In a ball at Charters Towers?’ Sally tried to hide her dismay.

–It’s really just a dance with a wartime theme.’

‘How – how nice,’ Sally said doubtfully.

‘Those war years were such a romantic time.’ Kitty’s normally clouded grey eyes were shining. ‘All the men in their snappy uniforms. The wonderful big-band music.’

‘I guess you have fond memories.’

For a moment, Kitty seemed lost in those memories, lost in the past, but her smile trembled sadly as if the memories were bittersweet. Then, with a little shake, she snapped back to the present, switching her gaze directly to Sally. ‘You could write a story about it for one of your magazines.’

‘About your love life during the war?’

Kitty made a little huffing sound of impatience. ‘About the dance, the old-time music and everything.’

‘I suppose I could . . . possibly -‘ Sally wondered if she’d touched a nerve. It almost seemed as though the war might be a sensitive subject for Kitty. She found herself looking hard at the old lady. Her skin was crisscrossed with lines and it looked incredibly fragile, as if to touch it might leave a bruise. Her hair was thin and snow-white, but she wore it swept up into a surprisingly elegant topknot.

Sally tried to imagine how Kitty must have looked seventy years earlier, but it was impossible.

‘There’d be plenty of photo opportunities at this ball,’ Kitty prompted. ‘The uniforms and medals. The forties dresses were very elegant, you know.’

‘I guess.’ To Sally’s surprise, she could almost feel a skerrick of interest in the idea. An old-fashioned ball was not her scene, but it could, quite possibly, kill two birds with one stone. She could head off to this dance and prove to her girlfriends that she wasn’t a total social drop-out, and if she took her notebook and camera, she could make a start on resurrecting her off-and-on career as a freelance journalist.

After the recent downward trend in the mining industry, her old job as PR rep for an engineering firm had been reduced to two days a week. She’d picked up casual work, subbing and writing advertorials for the local papers, but what she really wanted was to write features. Magazines with a focus on country lifestyles were always looking for good colour stories.

She would go, Sally decided with uncharacteristic impulsiveness, which was how she found herself, two weeks later, driving a hundred kilometres west on a Friday evening to a ball in Charters Towers, dressed in no less than a precious and fragile 1940s dress of pale-pink georgette that Kitty Mathieson had unearthed and offered to her.

The dress was beautiful, with a band at the hips and triangles on the hem outlined with black beading. Sally hadn’t been sure it would fit her, as Kitty was so tiny these days, but to her surprise it was perfect and it made her feel unexpectedly glamorous.

For one night, she would put on a costume and play a new role . . .